The Place of the Heart: new exhibition at the Ice House Theatre

My press release for my new show….

Three Rivers artist, Elsah Cort, is exhibiting twenty digital paintings in a show called “The Place for the Heart” from May 3-19 at the Ice House Theatre in Visalia. The exhibition will accompany the performances of Force of Nature presented by the Visalia Community Players.

After reading both the play and the book it was based on, Elective Affinities by Johann Wolfgang Von Goethe, first published in 1809, Cort created new digital paintings inspired by her readings. The play is about the struggles and misunderstandings and intrigues that can happen with marriage. In the very first opening moments of the play, Charlotte, one of the main characters in the play, announces, “Marriage is not a sacrament––it’s a work of art.”

Just like Charlotte asking in the play, “How is the heart made, I wonder?”, Cort adds that she is not sure how she makes these new digital collage paintings, which essentially come forth as collaged art forms made from many of her original photographs. “I play with them using photoshop, adding layer after layer, merging color, texture and form until I like what I see. It is fun”, she explains.

Over twenty years ago Cort began making collages using magazine cut outs and other paper textures. She announced at the time that she did not ever want to have one of those new fangled computers. Then she organized a group collage show and a friend brought in a new wonderful image that blended a photograph, words and a painting. She asked how was this collage made and was told it was photoshop. “I knew I had to change my mind and eat my words about not wanting a computer”, she says.

Now all these years later, Cort has embraced the computer as one of her collage tools.  She says, “I love collage as my art medium because it blends so many aspects together. It is like putting together a puzzle with no defined pieces or final image to achieve. There are strong serendipity and surprise factors that make the art work.”

Cort has lived in Three Rivers for 36 years and is the founder and organizer of the Three Rivers Biennial Artist’s Studio Tour, which comes back on March 21-22-23 in 2014.

For ticket information about Force of Nature, visit visaliaplayers.org or call 559-733-9329. 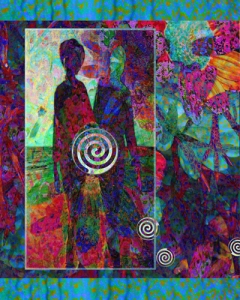 This entry was posted on May 3, 2013 by Elsah in Art and tagged Digital Collage, exhibition.